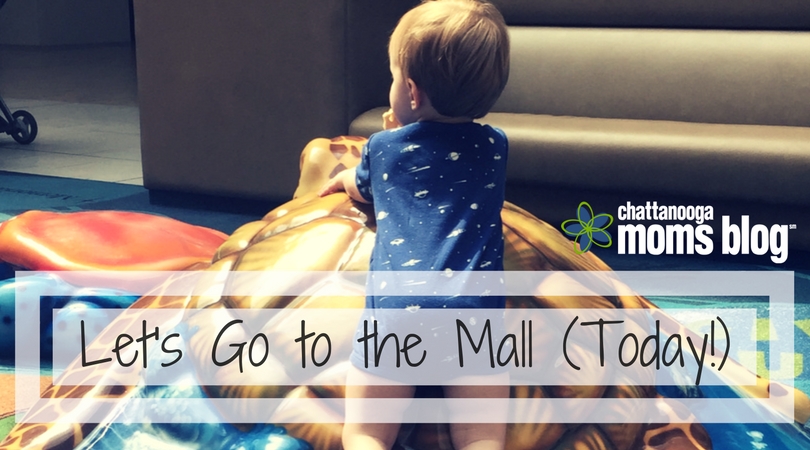 Until about two years ago, I envisioned a house full of children of my own one day. I thought four seemed like a good number. It had worked out well for my family. But then Arthur came along, and while he’s the best thing that’s ever happened to us, he demands the attention and energy of four kids all on his own. My husband and I haven’t closed the discussion on another child in the future, but for now, we’re content as a three-person family. And because we might be one-and-done, Arthur won’t benefit from built-in playmates.

Instead, we’ll have to find other ways to encourage interaction, even if that means hitting up the local mall and plopping him down into the germ-ridden play area with complete strangers.

I’ll be the first to admit that my intentions weren’t entirely pure when we first started going to the mall to play. I loved the ability to set Arthur down on a quasi-clean matted area and zone out on my phone. Being a parent is exhausting, and it’s 24/7. Living in a constant state of did-I-remember-to-do-such-and-such-oh-my-gosh-don’t-eat-that-get-down-from-there-please-go-to-sleep tends to wear you down, so it’s important to catch a breather every once in a while.

As great as it is to catch a break while your kiddo explores his reflection in the wobbly mirror, there are other benefits to letting him play on the dingy sandcastle slide and that grubby turtle that’s probably never been washed.

Here’s why I take my kid to the mall (and why you should join us sometime):

We live in the middle of nowhere, or at least that’s what it feels like. We chose this neighborhood, but there are downsides to being tucked up in the north end of the county. Absent siblings or other nearby playmates, Arthur and I have to seek out the company of others. Enter Northgate Mall. On any given mid-morning, there are a handful of kids of all ages and backgrounds climbing over spongy, sea-themed structures.

Arthur’s social interaction has evolved over time. When we first started going, he would cling to me, fearful of the other kids and the strange environment. Now, he offers a hesitant wave to these strangers, even allowing them to sit next to him on the slide.

#2. He’s getting a healthy dose of germs.

I’m something of a germaphobe, a fact I didn’t fully appreciate until becoming a mom. But the thought of putting Arthur at risk for getting something as normal as a cold makes my skin crawl. Despite this slight paranoia about germs, I understand the need for routine exposure. When we go to the mall play area, I have to set aside my fear that Arthur will contract flesh-eating bacteria from the blowfish-shaped tunnel and accept that germs are a part of life. Given that I’m almost positive he picked up hand-foot-mouth from his doctor’s office, there’s never a safe bet when you’ve got a kid who still drops to his hands and knees to explore.

To date, we’ve been unable to leave Arthur alone in the church nursery for longer than 20 minutes. The separation anxiety is strong with this one. Call him a mama’s boy, but my kiddo does not like to be left alone, especially without me. But I know that independent play is a critical part of development. If he’s going to be a successful adult with friends and a career one day, he’s going to need to learn how to be on his own.

This concept has gotten easier as Arthur’s gotten older. He needs me less often when we hit up the mall play area these days. Letting him scale the back of the sea turtle or make faces at himself in the mirror – while I watch from a distance – helps him build his sense of independence. 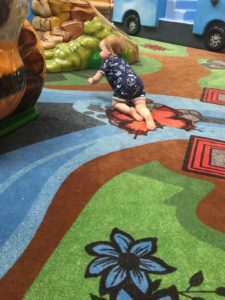 In the words of my husband, the mall play area isn’t just a dumping ground for tired parents. It’s a grimy microcosm of the adult world ahead. Kids playing here learn how to interact with each other, how to navigate the environment, and how to solve problems. They may also contract bubonic plague. At least there’s a cure for that now.