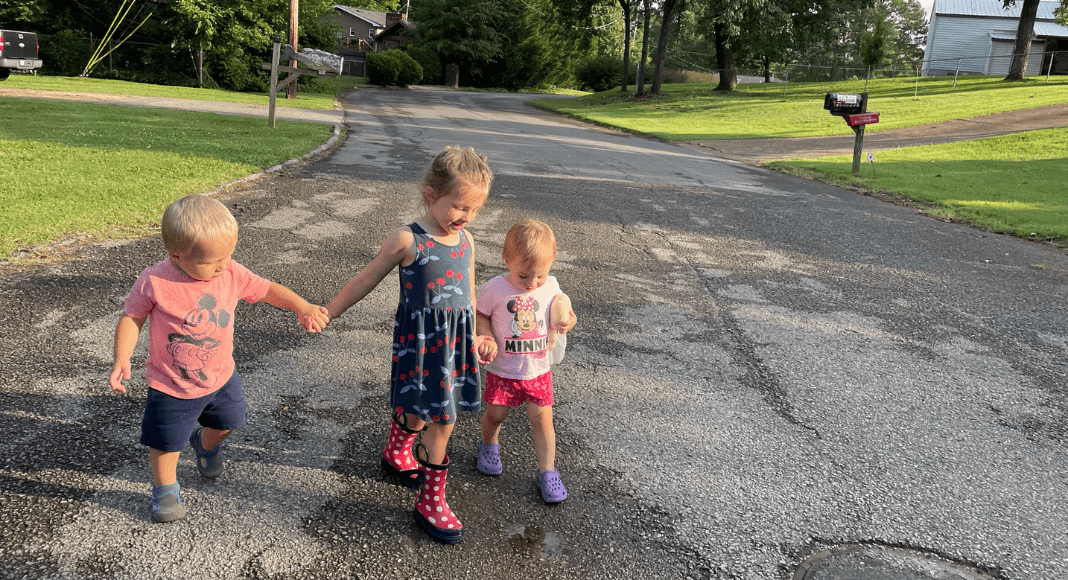 Life is full of seasons. Seasons of childhood, adulthood, joy, grief, waiting, and thriving. Seasons where some ages are a struggle and some are a blessing. The current season our kiddos are in is a frustrating one. The twins are at an in-between age of not being able to do much but they want to do more, and my oldest can do more but she can’t because the twins get in the middle of it and it’s just chaos, crying, and shouting.

Most days feel like it’s been nothing but separating fights and trying to keep my cool while pleasing everyone. Yet, there is joy in it.

Eloise has heard a lot of ‘In a few minutes’ or ‘Wait until the twins go to sleep’ during the last few months. It’s hard telling her she can’t paint, play a board game, or do something else because that’s how she thrives. She’s been doing puzzles since she was about two-years-old. She’s sweet, smart, and her imagination is starting to develop and yet she can’t use it as she wants. If I sit on the floor to play with her or read, one of the siblings sits in my lap, followed by the other. They can’t share or won’t, and so crying and yelling ensue followed by me getting frustrated, and removing myself from the equation. Daddy is home at the end of the day and yet they want to be at my feet crying as I’m making dinner. My vocabulary has been filled with “I don’t need to hold you all the time,” “Stay off each other,” “You have to share,” and all the other typical parental phrases. I have to remind myself that this too shall pass and it will get better. We try to get out of the house before it gets hot, but a lot of times it’s a failed attempt. The library and aquarium have become our regular visits to give a slice of calm during this season.

Even though this stage has its difficulties, it’s also been a time to see my twins’ little personalities develop and watch them finally start playing with each other. Audrey is for sure the third child. She always has to be in the middle of everything. She loves to help clean up, can stay still when hiding, loves to snuggle and has the biggest attitude (think throwing herself on the floor big). William likes to snuggle to an extent as well, but he doesn’t stay long. He loves all things vehicles, books, sand, and going for walks. He’s testing out the different eye glares/rolls and thinks he’s funny. He has also recently started getting upset if you don’t give him a whole of something. Like melt down crying. Oof, I’m going to have my hands full with attitudes for the next few years. If anyone would like to take them for that time and then give them back, be my guest. They love their older sister and want to do whatever she does (like sit next to her on the chair watching TV, run after her, and always say goodnight). They also love watching daddy mow the grass and run back and forth from the front door to the porch trying to follow him.

Audrey and William think it’s the funniest thing to throw their stuffed animals back and forth to one another in their cribs. I’ll be somewhere in the house and hear an “Ah” from one and then a responding “Ah” from the other and back and forth it goes. They stand by the front door, look at each other and then run into the kitchen, turn around, look at one another and run back. And back and forth and back and forth. It’s not always so happy and friendly. Hitting is not something that William had to learn — he just does it. One morning, I walked into the kitchen behind him just as he took a swing to Audrey’s belly. Why? I don’t know. He’ll start playing nicely with something and then it’s a tool to swing around or smack his sisters on the head with. I made a bin of water beads for play the other day and they were great playing for about 30 minutes; then, there went a cup full all over sister’s head followed by them being thrown around the room.

My patience is being stretched thin, life feels like chaos, and I have to take a deep breath before reacting to what feels like every situation. However, there truly are many more moments of joy and I have to remind myself of those often and focus on them. No matter how much they test us, the laughter between them and the sweetness they show one another outweighs it all. I know this stage is not forever and that this too shall pass. I know the next stage will have its frustrations too, but hopefully all the infant teething will be over by then.

What season of your kids’ ages was your favorite?