On July 16th, 1969, around 9:30am ET, Apollo 11 was launched through the Earth’s atmosphere and the three astronauts aboard, plus hundreds of scientists below, set the course for the moon and history. 50 years later, this event remains one of the most unique and uniting times of humanity, and remains a fascinating topic for kids today, many whose grandparents were still in elementary school at the time. 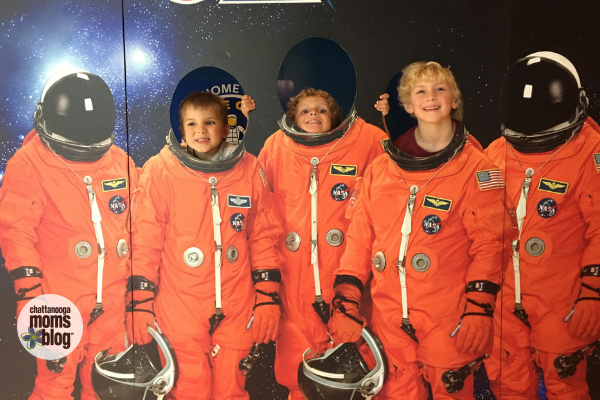 The space “bug” has hit our four-boy family. Everything is a rocket: an empty aluminum can, a party hat, the bunk bed, even my mini van was taken over on a cool day. We have killed a few trees for paper and used gobs of scotch tape in the name of rocket design, and I just have to look away each time I see a used toilet paper roll that was plucked from the trash can and repurposed into a command module. For the moment, sports heroes and jerseys are forgotten. Instead, 75+ year-old men are the heroes: Michael Collins, Buzz Aldrin, and of course, Neil Armstrong. Episodes of Wild Kratts and Pete the Cat have been replaced with the new movie, Apollo 11, viewed over and over and over.

All in all, it is pretty great fun. I hope that my kids continue to play, imagine, dream and create in the mathematical and scientific realms. But more than that, I hope that all this learning and reading about the Space Age gives them a greater appreciation for how amazing the universe is and what is still to be known and explored.

If your family has not gotten into the space spirit yet, you can still celebrate the 50th anniversary of the moon landing with the following:

This book list has been fabulous as I have looked for books about the moon landing. I would also add some for younger listeners like Berenstain Bears on the Moon and Curious George Goes and the Rocket. There are many more that we have found at the Chattanooga Public Library; my favorite way of searching for specific titles is using the online system and having books sent to the library to which we live closest. Be aware; many of them have a long waiting list! 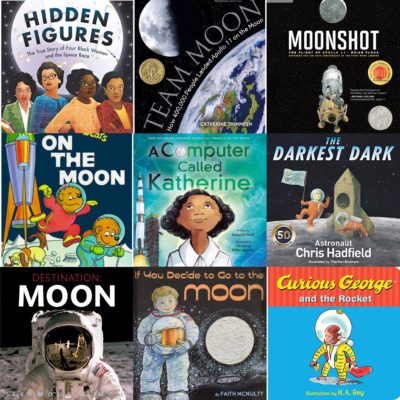 Obviously, we are fine with using imagination and inexpensive materials (ahem, trash) in this house, but space themed crafts are everywhere these days! Hobby Lobby has cheap to high end rockets that really blast off, Oriental Trading has several options for large groups of kids crafting together and this online art site has some very cool space themed classes that are perfect for younger children beginning in art.

The Apollo 11 film may not be up with Toy Story 4 or Lion King on a kid’s summer watchlist, but for a little while longer, you can see it at the IMAX in Chattanooga or rent it though Amazon Prime. It is more of a documentary, but uses only original footage and audio, creating a time warp to 1969, allowing us to watch it as our parents did. Watching a 300-foot rocket with over 250,000 gallons of fuel launch is pretty impressive, whatever your cinematic preferences.

Our space journey was kicked into high gear after we visited Huntsville’s U.S Space and Rocket Center. I can highly recommend it, as it’s great for families with varying ages. There are plenty of outdoor exhibits so kids can run around after being inside the museum, as well as free rides, climbing walls, playgrounds and picnic areas. The exhibits are overwhelming at first, but don’t miss the Saturn V rocket in the newer building of the museum. We enjoyed it and definitely want to go back. One of the employees told us that there would be some kind of celebration to mark the 50th anniversary of Apollo 11, and maybe even some of the astronauts would come. So if you decide to go this July, consider checking to see what is going on and if tickets are available. 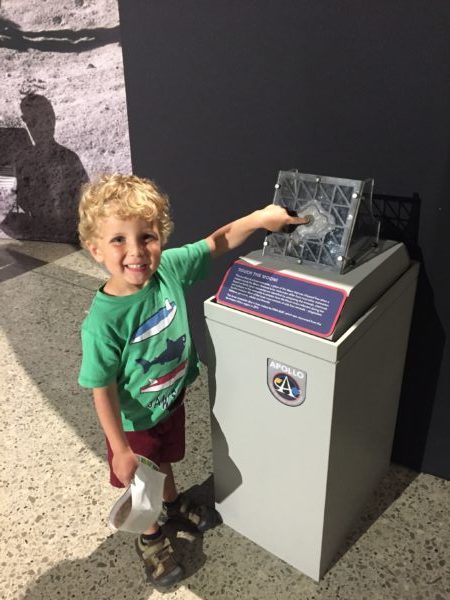 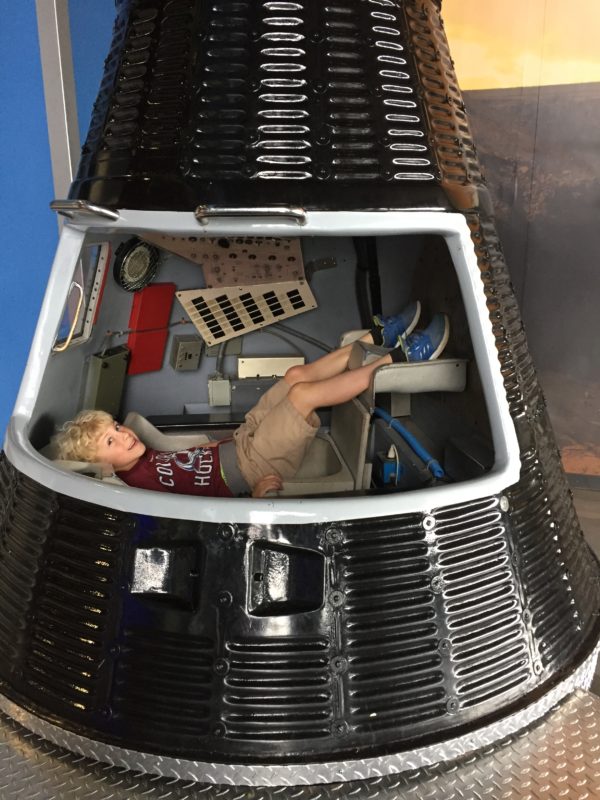 We are planning on celebrating the moon landing all week and trying some authentic “moon food.”  You can order it on Amazon or head over to Academy Sports and Outdoors to pick out treats! If you decide to be more creative and historically accurate, you can make a rocket cake to eat like Buzz Aldrin’s family did when he splashed down safely into the Pacific Ocean.

Our oldest is having a space themed birthday party, so we are searching for all kinds of space decor. Dollar Tree has space themed bulletin board packs and Oriental Trading is always a great source for decor, but our main decoration is an easy DIY map to the moon that we will use to track the timeline of the moon landing. Just pick up a few black sheets of poster board and chalk pens, and let the kids explore and create how to make their own Saturn V rockets and Apollo 11 crafts out of paper, tape and colors! 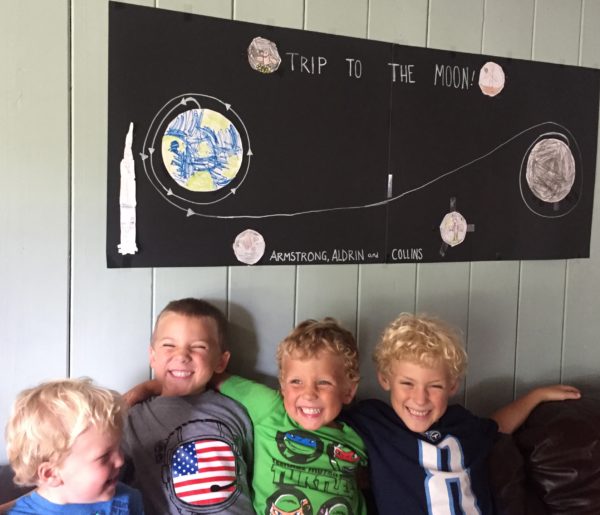 I have enjoyed learning about a time I had not previously studied, and gaining a new understanding of how a rocket works and a greater appreciation for the hundreds of thousands of people who worked together to send astronauts to the moon. So grab a bag of space ice cream or spaghetti, hit the IMAX, the library or a craft store, and celebrate the moon landing with us! 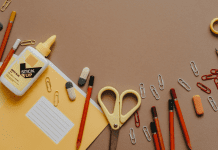 How I Am Homeschooling My Preschooler 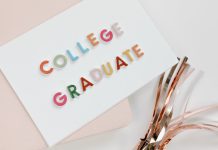 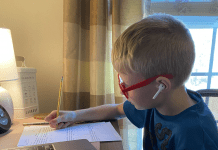